An example task that we might want to repeat is printing each character in a word on a line of its own.

We can access a character in a string using its index. For example, we can get the first character of the word 'lead', by using word[0]. One way to print each character is to use four print statements:

While this works, it's a bad approach for two reasons:

This is shorter --- certainly shorter than something that prints every character in a hundred-letter string --- and more robust as well:

The improved version uses a for loop to repeat an operation --- in this case, printing --- once for each thing in a sequence. The general form of a loop is: 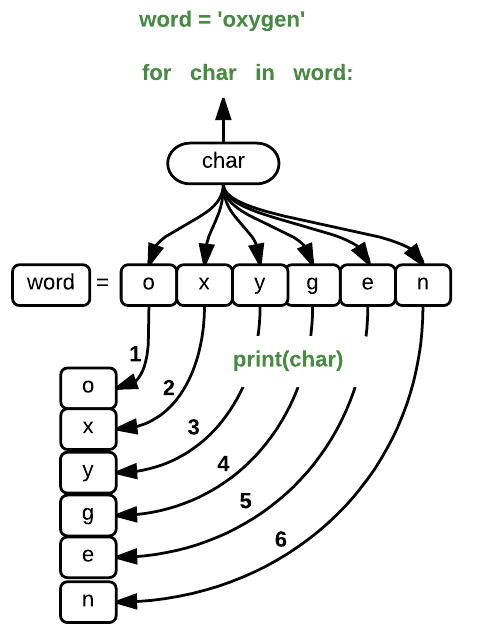 where each character (char) in the variable word is looped through and printed one character after another. The numbers in the diagram denote which loop cycle the character was printed in (1 being the first loop, and 6 being the final loop).

We can call the loop variable anything we like, but there must be a colon at the end of the line starting the loop, and we must indent anything we want to run inside the loop. Unlike many other languages, there is no command to signify the end of the loop body (e.g. end for); what is indented after the for statement belongs to the loop.

What's in a name?

In the example above, the loop variable was given the name char as a mnemonic; it is short for 'character'. We can choose any name we want for variables. We might just as easily have chosen the name banana for the loop variable, as long as we use the same name when we invoke the variable inside the loop:

It is a good idea to choose variable names that are meaningful, otherwise it would be more difficult to understand what the loop is doing.

Here's another loop that repeatedly updates a variable:

It's worth tracing the execution of this little program step by step.

Since there are five characters in 'aeiou', the statement on line 3 will be executed five times.

The first time around, length is zero (the value assigned to it on line 1) and vowel is 'a'. The statement adds 1 to the old value of length, producing 1, and updates length to refer to that new value.

The next time around, vowel is 'e' and length is 1, so length is updated to be 2.

After three more updates, length is 5; since there is nothing left in 'aeiou' for Python to process, the loop finishes and the print statement on line 4 tells us our final answer.

Note that a loop variable vowel is just a variable that's being used to record progress in a loop.

Challenge - scope of the loop variable

Note also that finding the length of a string is such a common operation that Python actually has a built-in function to do it called len:

len is much faster than any function we could write ourselves, and much easier to read than a two-line loop; it will also give us the length of many other things that we haven't met yet, so we should always use it when we can.

Python has a built-in function called range that creates a sequence of numbers. range can accept 1, 2, or 3 parameters.

Challenge - loop over a range

Exponentiation is built into Python:

Challenge - multiplication in a loop

Write a loop that calculates the same result as 5 ** 3 using multiplication (and without exponentiation).

Knowing that two strings can be concatenated using the + operator, write a loop that takes a string and produces a new string with the characters in reverse order, so 'Newton' becomes 'notweN'.

The built-in function enumerate takes a sequence (e.g. a list) and generates a new sequence of the same length. Each element of the new sequence is a pair composed of the index (0, 1, 2,...) and the value from the original sequence:

The code above loops through xs, assigning the index to i and the value to x.

Bonus challenge: enumeration for computing the value of a polynomial

Write a loop using enumerate(cc) which computes the value y of any polynomial, given x and cc.

From here you can search these documents. Enter your search terms below.